The trip from Kyoto to Rinsoin temple takes approximately 4 hours. The shinkansen bound for Tokyo passes through Shizuoka city. From Shizuoka one must transfer to a local train to Yaizu. It is three stops to Yaizu and takes about 15 minutes. From Yaizu station it is another15 minutes by taxi up the winding road to Rinsoin. The mountain that Rinsoin is located on looms tall behind the town of Yaizu. 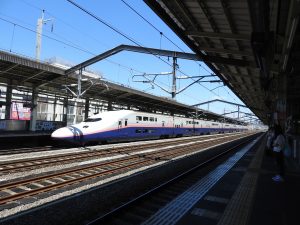 Yaizu is a delightful rather run down small town. With the exception of the ocean nearby, it is somewhat reminiscent of mid west America. There are vibrant businesses and small restaurants and bars mixed in with abandoned buildings and overgrown areas. 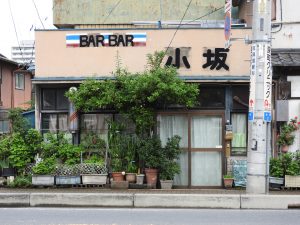 Yaizu is spread out length ways along the oceanfront. There is a working port with many ocean going fishing vessels but no tour boats visible at all.

The harbor is definitely not meant to be a tourist attraction. There are no trendy expensive places overlooking the bay but rather down to earth shops and ship maintaining enterprises. Walking along the street next to the harbor I saw this little Albacore fishing boat. These little boats go out on the open sea for days at a time. 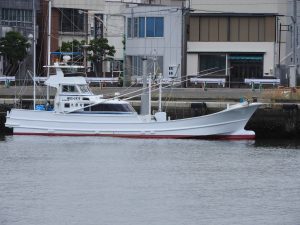 In addition to commercial fishing, the Shizuoka area is known for large scale tea agriculture. From the shinkansen one may see many fields of tea plants dotting the hillsides and valleys. 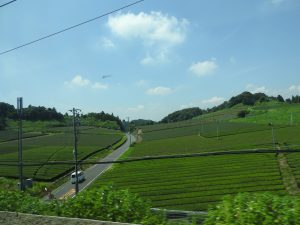 On the drive out of Yaizu one passes by smaller, more human scale fields that are planted in tea. The raw leaf of the tea plant does not taste particularly noteworthy. To transform the raw leaves into green tea it is necessary to bruise the leaves and then steam them to draw out the subtle flavors. The steam also removes the acidity from the leaves. Though black tea comes from the same tea plant it is put through a completely different process of curing. When the fresh tealeaves are harvested from the plant there are two cuttings.  The primary harvesting produces the most premium tea. 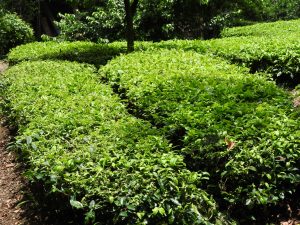 On the outskirts of Yaizu the narrow road begins winding up the mountain named Takai Kusa Yama or Tall Black Mountain. As it approaches Rinsoin, a large cemetery begins. This cemetery is well maintained and continues upwards in the valley and around the back of Rinsoin. 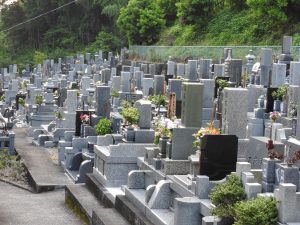 This graveyard stretches up to where the mountain becomes so steep that it cannot go any further. From the mountain heights above the cemetery there is a beautiful view stretching down the valley to the ocean. 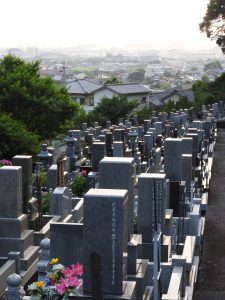 Along the driveway approaching the temple grounds are many clusters of beautiful Ajisa flowers (Japanese hydrangia) that have been planted there by Chitosi, the wife of Hoitsu Suzuki Roshi. She is a master sensei of Japanese flower arranging (Ikebana) and she has several long-term Ikebana students in Yaizu. 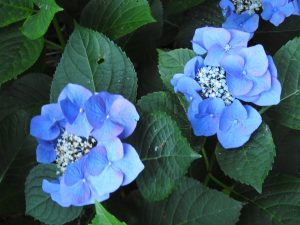 She creates several works a week and these beautiful arrangements adorn the entry to Rinsoin. Chitosi san is a very wise woman and she once explained to me about her duties. She said, “no mater what, a temple wife must always be with open arms” to visitors. 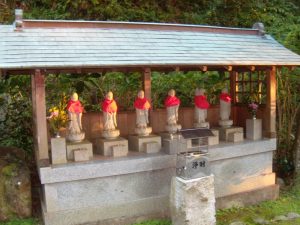 When Shunryu Suzuki Roshi moved to America and passed control of Rinsoin to his son and Dharma heir, Hoitsu was only 25 years old and his wife Chitosi was a mere 20. By tradition this is an exceedingly young age for a priest to be entrusted with the management and responsibility of a temple. Usually a priest must be 50 years of age before accepting the responsibility for running a temple, especially a temple so large as Rinsoin. 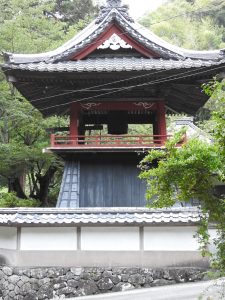 Rinosin was once a Tendai temple before changing to Soto-shu. 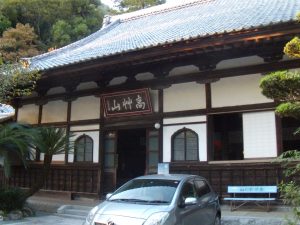 Rinsoin is such a large temple complex that there are old buildings that are seldom used. 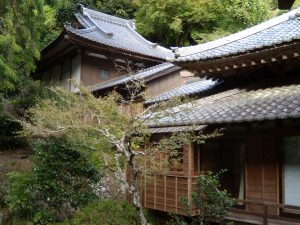 Below is the small altar in the guest quarters. 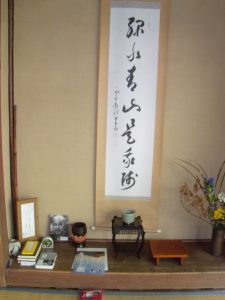 Wooden fish outside the Sodo (Zendo) hall which is struck with a wooden mallet to signal time for Zazen . 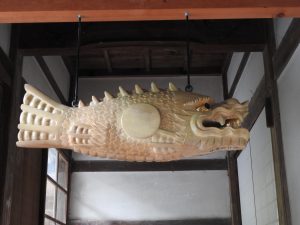 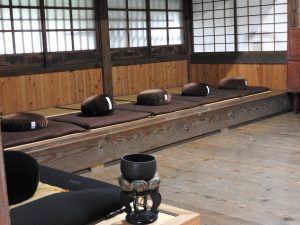 There are 14 seats in the Sodo hall. 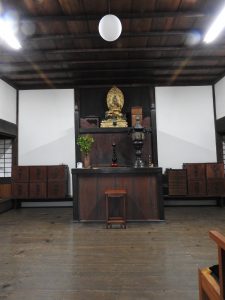 Altar in the Sodo. 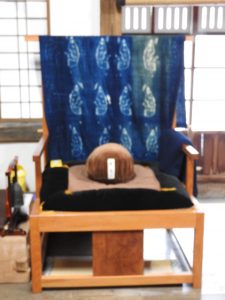 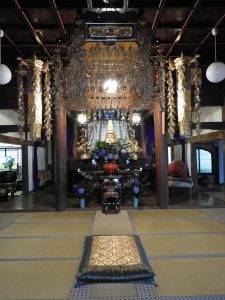 Main altar in the Butsuden. The hall can seat several hundred people. 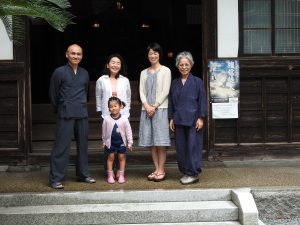 From left to right, Sungo, Marumi, Kumi and Chitosi in front is Chitosi’s little granddaughter.

I am now here at Fukojo-ji Temple for the month of June. It is mid summer so the weather is beginning to be very hot and muggy on some days and rainy on others. One thing about the weather in Japan though is that it is variable and it is rarely the same two days in a row. 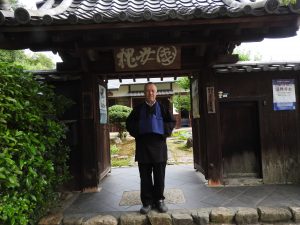 The resident priest and provisional Abbot here is Jirai Reinhardt Mehl. He always has several work projects that he wants to accomplish during my stay. We work in the mornings but in the afternoons I am usually free to pursue other interests. Jirai is gone three days out of the week working at an International Zen Training center in Fukuyama. The International center is run by a private foundation. The mission of the foundation is to provide a place to allow professional people and others to experience the life of Rinzai Zen for a limited time. It is a place where self discipline may be practiced. This foundation has purchased several old Temple buildings from monasteries and rebuilt them at their site near Hiroshima. Sometimes companies send employees to the International training center so that they may learn mindfulness and self motivation. 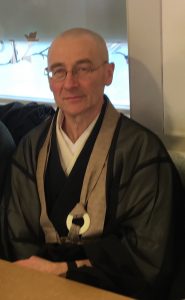 During the days when Jirai is gone my job is to caretake Fukujo-ji. My duties consist of opening the gate in the early morning and closing the gate in the evenings. Additionally, In the summer I have to open the shoji screens in the mornings and close them in the evening. I am also responsible for carrying on the tradition of doing  Zazen followed by reading of the sutras in the mornings. I enjoy this time by myself and I never feel alone because I am always accompanied by the generations of Sangha that has gone before me. Sometimes the feeling is overwhelming that I have been entrusted with the solemn responsibility of care taking this beautiful home of the Buddha Dharma.

A typical day here at the temple begins with Zazen at 5 AM which goes until 6:30 AM. After Zazen there is Choka (service). We chant the Lotus Sutra, the Heart Sutra, the Dia Shin Dhrani and the Buchinson Dhrani along with several smaller verses and echoes. The chanting takes about a half an hour and it is done very fast so I find it impossible to keep up with the tempo.  Once I loose my place it is sometimes difficult to find it again. I find that I am always glad when the chanting is done.

After the choka (service) is done we then prepare breakfast which always consists of Okaiyo. This traditional rice porridge is very light on the stomach but at the same time quite filling. One of the most useful things I have learned  so far it how to prepare traditional Okaiyo.